When the United States won the 2019 FIFA Women’s World Cup it gave a seismic jolt to the popularity of the sport among high school girls, who reveled in seeing their heroes showered by confetti in a Times Square ticker-tape parade formerly reserved for the likes of astronauts and New York Yankees’ championships. Who among them wouldn’t want to be Team Captain Megan Rapinoe signing a mega-deal to pitch BodyArmor, or striker Alex Morgan boasting of having 8.8 million followers on Instagram? You
could almost hear the stampede of high school girls rushing to the Athletic Office to sign on for the upcoming season.
But with the increase in the number of girls pulling on a soccer jersey and lacing up their sneakers, we find that injuries have grown exponentially, especially in the vulnerable knee area. And this comes about based on a number of key factors.
The first takes place even before a girl steps on the field at the start of the school year.

Think back when you were a teenager in the summer between school years. It’s doubtful you spent the summer training everyday to run a 5K. More than likely you either hit the beach or reacquainted yourself with your X-Box. For many teenagers, the most strenuous activity in the summer is filling an order for a medium cold brew (mocha swirl, no sugar). Thus, a female body already possessing low muscle tone tends to drift into a sedentary state. Both situations mentioned above, however, do little to protect our athletes from the perils of playing on high school and town fields which are less than perfectly landscaped and often pockmarked with holes and divots. This is like a minefield for knee injuries when girls are running and cutting during a game. So by the very nature of the sport we know there will be knee injuries. But what happens then? Of course, any injury precipitates a visit to a physician where, best case scenario it just needs some ice and worst case scenario, arthroscopic surgery. Following either diagnosis, this is when the parent should turn to physical therapy as the next step in their daughter’s recovery.
Whereas a physician is trained to have laser vision on the area where an injury occurs (in this case the knee), a physical therapist looks at the injury in the scope of the entire body. We know the injury occurred when the player cut to her left during a game, but was the knee already compromised, perhaps by low muscle tone, excessive weight, weak ankles, or all of the above? A PT looks at what caused the injury, not just how to treat it. And the reason is obvious; so that the next time the athlete cuts to her left her knee will be more prone to endure the movement. And, perhaps more importantly, a PT is focused primarily on seeing the person return to full mobility, not just getting the athlete back on the field.
Case in point, I recently worked on an injured athlete who attended high school just south of Boston. The team’s coach kept calling me asking when this 16-year-old girl would be ready to get back on the team, what treatment was she receiving, etc. I told him aside from possibly violating umpteen HIPPA rules; it was not my job to get her back on the field. It was my job to make sure she lives a comfortable, pain free life. As the PT industry stays up to speed on ways to treat sports injuries, and with insurance plans becoming
more flexible in their coverage guidelines, the ability to treat young female soccer athletes has also grown accordingly. As a result, we are seeing faster recoveries as we delve deeper into how the entire body factors into the injured knee, by not just treating it as an isolated part of the anatomy. Knee pads, elbow pads, shin pads, mouth guards, are all necessary protection to help avoid injuries on the soccer field. Now we can add physical therapy among the required PPE (Personal Protection Equipment) every female
athlete should have.

Shawn Cray, DPT, CSCS
Shawn graduated from Northeastern University in 2007 with a doctorate degree in physical therapy. He started his career at a outpatient facility in Quincy before realizing his dream of owning his own clinic in 2009. He is also a Certified Strength and Conditioning Specialist (CSCS) through the National Strength and Conditioning Association as well as an Advanced Clinical Education Instructor through the American Physical Therapy Association (APTA).
Recommended Posts
Schedule your appointments

Click on the Google link below to tell the world about your experience!

We're not around right now. But you can send us an email and we'll get back to you, asap. 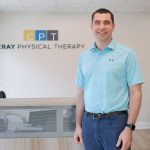